It's my 3rd write up on Whisk. It's actually pretty good that we keep going back (see here, and here). This time we decided to see the antipasto for two (RMB60). It didn't look bad although I wouldn't mind a few more vegetables like artichokes or aubergines. Everything tasted OK but then other than the roasted peppers everything was ready made and it would be difficult to screw up. Having said that the prosciutto tasted kind of funny and we left it untouched. 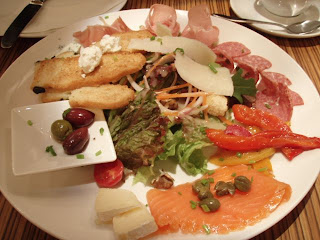 My tuna salad (RMB50) looked very colorful and appetizing. I like salads when they come with salami. The tuna came in big chunks and they were home-made! Wow. The dressing was zingy enough to stand up to the stodgy taste of the salami and tuna. There was way too much of the stuff on the salad though. If they were going to serve the dressing on the side anyway then why dunk so much of it on the salad to begin with? 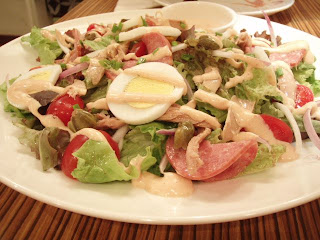 As full as I was I was determined to try the brownie with ice cream (RMB35). It was worth stuffing myself silly. The brownie was very soft and moist - I am officially hooked. We had a little debate over the 'brownie' because to us we would call this thing a fudge. I thought brownie has a harder crispier top? 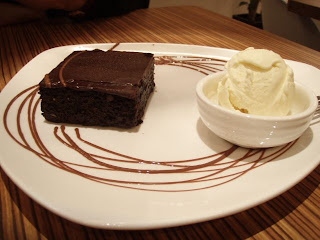