Day 8. Never took pictures of airline food before but I thought I would write about the meal which concluded the Hong Kong Food Odyssey. The flights back to Shanghai were all pretty full and we somehow ended up being on standby (don't ask). The good news is we managed to get on and I even got bumped up to first class.

I picked the western menu, by JW's California at the Marriott. The starter was seared scallops with honey mustard vinaigrette. It didn't look bad but I thought the scallops might be fake? Is there such a thing as imitation scallop (like those orange Japanese "crab sticks") I wonder? 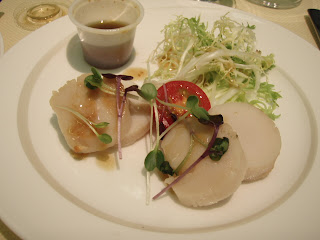 My main course came swimming in the soy and balsamic butter, thank god it wasn't bumpy. The smoked beef fillet was dry as expected, and the kipfler potato and roasted endive were the tastier options on the plate. 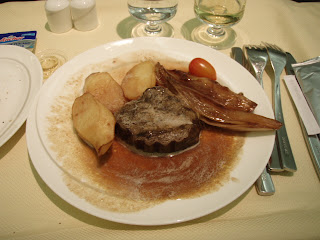 I don't think I'll be paying to fly Dragon Air first class now that I've tried it. I guess you can say the food is marginally better. Here's the business lunch I had on my way out: 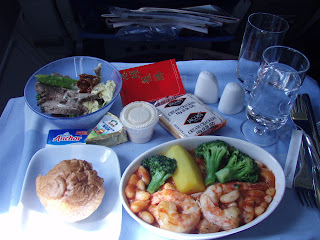 There was veal salad and some cooked-to-death prawns and broccoli with beans from tin. Once again the Haagen Dazs ice cream saved the day.
Posted by Shanghai Bunny at 3/04/2007