Day 6. A recent addition to the Hong Kong dining scene. We booked a week in advance and managed to get a table. The woman on the phone got on my nerves though when she went on about the dress code. Who would wear tank tops and shorts in February?

The restaurant is black and sleek and not very Japanese looking. The tables are way to close to each other though and again, kind of like seating in McDonald's if you get a table of two.

OK back to the food. We ordered a couple of starters to share and this is the sashimi salad with Matsuhisa dressing (HK$240). We got 7 pieces of tuna sashimi, which was rather generous if you ask me. They were exceedingly fresh and they were seared slightly. The dressing composed of sesame oil, soy and some other secret ingredients and it was very zingy and refreshing - it brought out the taste of the fish. Two thumbs up Mr. Matsuhisa! 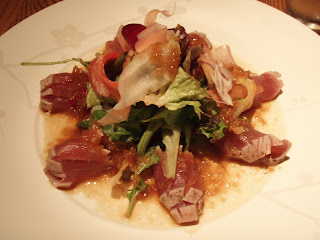 Our other starter: tuna tataki with tosazu (HK$180). Why did it come in 7 pieces again? Made it very awkward to share between the 2 of us (and there were mostly couples there). The tuna was really juicy and the tosazu sauce added a delicate vinegar taste. I prefered the sashimi salad if I had to pick one between the two. 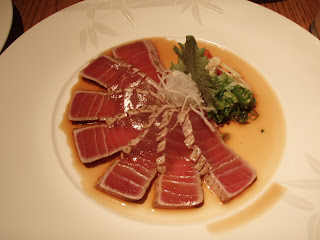 The Nobu style Wagyu dumpling (HK$195) was the only hot dish we ordered. They were OK but nothing to shout about. I guess at least you know it had Wagyu beef in them as supposed to some mystery meat. The pastry was nice and thin though. 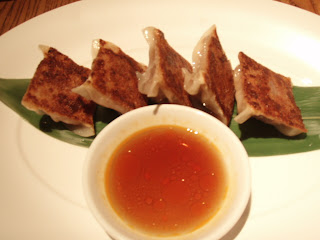 The toro and spring onion maki (HK$180) and the spicy tuna maki (HK$85). Both were excellent! I never tasted seaweed so crisp before in my life. The rice and the fish were in top form and we polished them off in no time. I also 'accidentally' ate 4 of the toro rolls - sorry B! ;-) 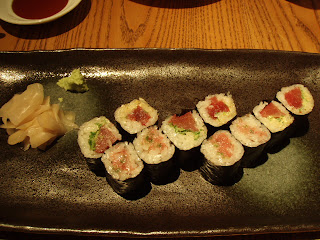 We decided to order more rolls and picked the yellow tail and spring onion maki (HK$80). I think my marginal utility curve was starting to diminish and therefore they were not as satisfying as the other rolls. My sister B gorged them down pretty quickly though so I am sure they were good. 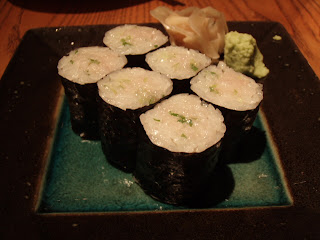 B also insisted on the sweet potato tempura and it was sadly a little disappointing. The potato was so hard it was difficult to eat. The tempura batter was very thin and actually stuck to the potato and not sloppy! How'd they do that? 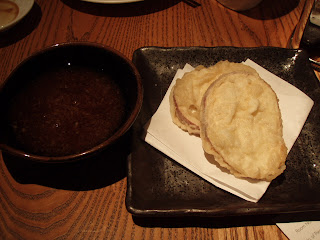 We didn't have room for dessert. The damage for two came to HK$1200 - we were about to feel good on the fact that it was less than we thought. Then we spotted the bottle of Fiji water we got served at the beginning of the meal and that was HK$95!!! WTF?