Day 7. Our Hong Kong Food Odyssey was almost coming to an end. Instead of Pierre we decided to come to Under Bridge Spicy Crab instead with our dear friends K and N.

Under Bridge specialises in typhoon-shelter styled seafood - which a lot of chili and garlic are used. Like a lot of the seafood joints in town the front of this small place was lined up with fish tanks. On the floor near the entrance were boxes of live mud crab - apparently from Vietnam. Some of them were almost as big as the size of a dinner plate! 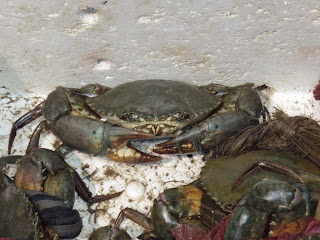 We ordered 2 medium-size crabs and they were $HK580 each. We were asked our preference on the chili scale and we thought we'd be conservative and picked medium. It was still rather spicy, and we are not wimps when it comes to chili (we ARE the vindaloo connoisseurs). Next time we will go with the low level because we the spiciness could overpower the crab. The crab meat was sweet and succulent and unusually fleshy. Even my husband was impressive and he doesn't like crab normally. He said when he saw the pile of chili he thought it was a bit OTT. Then he tried some and it was very very tasty and he even mixed it with his fried rice. Cunning but trots inducing. (!) 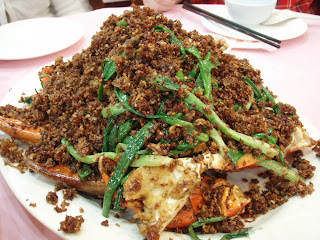 We all know how annoyingly chunky a Blackberry is - and our medium-size crab claw won the competition hands down in this case! Can't imagine how large a big crab would get. 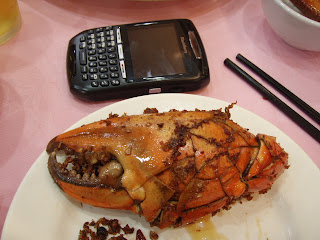 We also ordered deep fried salt and pepper mantis shrimps (ugly as sin but quite meaty), clams with chili and black bean sauce, stir-fried scallops and broccoli, and fried rice. The crabs were so good I actually FORGOT to take pics of the other dishes. Sorry. :)
The bill came to HK$1500 for 4, with quite a few beers. At first glance it seemed expensive but then considering the quantity of crab and seafood we had it was pretty good value. I think if we go often enough the prices for the crab would drop a little too.
Under Bridge Spicy Crab (4 locations in Causeway Bay)
G/F, 405 Lockhart Road, Causeway Bay, Hong Kong. Tel: 2893-1289
Posted by Shanghai Bunny at 3/04/2007