Saturday night and Coconut Paradise. We thought it would be busy and we went early (like 7pm). The place was still full! Luckily there was one small table left on the terrace overlooking the garden. Good thing the weather was mild enough to sit out...and it was pretty romantic after all!

The papaya salad (RMB48) was right on the spot - not the best I've had but it was pretty dang good. The dressing was sour and spicy and the papaya fresh. The portion was rather stingy though. 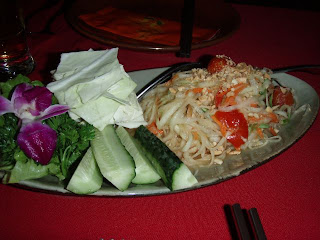 The seafood salad (RMB70) had a really nice dressing too - spicy but not fiery. There were prawns, clams, squid, and some vegetables in it. At least the portion was a little more reasonable, but then it was still expensive for what you get if you ask me. Also I should have ordered the squid salad instead as it comes with glass noodles and they always soak up the dressing nicely. 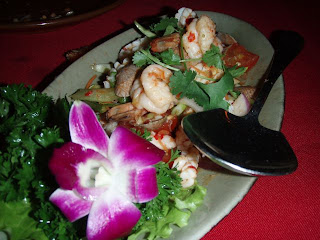 The prawn cakes (RMB68) were pathetic looking. Usually they should be plump and thicker looking. It tasted as pathetic as it looked - too soft and pappy. Because of the thinness there were more batter than prawns. Disappointing but the worse be yet to come. 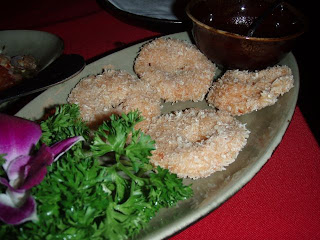 The beef on sizzling plate (RMB70) was also pretty lame. It was basically beef fried in oyster sauce! There was nothing Thai about the dish at all. The only good point was that the beef was pretty lean and juicy, but show me the Thai spices!! 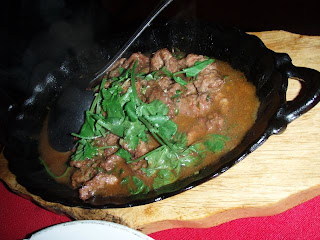 We also got a small tom yum soup(RMB80). The 'small' tom yum turned out to be pretty big and we each had about 3 to 4 bowls. It was pretty red hot at least, just like it should be.

Just as we thought the chef had redeemed himself or herself with the soup there came the pad Thai noodles (RMB60). It was another flop. It was so wet and had no taste whatsoever.

We were tempted to ask whether the chef was on holiday of something? The food was so much better for our previous visits and we didn't mind paying the expensive prices. Now for what you get it's definitely a rip off. Please bring the good food back! We love Thai food!