Day 7. I wasn't going to write about Sportful Garden as I thought it was just going to be another typical dim sum lunch. What made this visit extraordinary was unfortunately not because of the food but the appalling service. More on that later.

To be fair the dim sum quality was above average. I got to try new things also, as supposed to my regular favourite dishes because of my friends E and S. It's good to go to dim sum with more people for sure.

The pan-fried dumplings with crab meat and pork was freshly made and crispy. They weren't half as greasy as I thought they would be. I didn't really taste anything remotely like crab meat, though according to the menu hand-picked crab meat was used? In any case they were rather delicious. 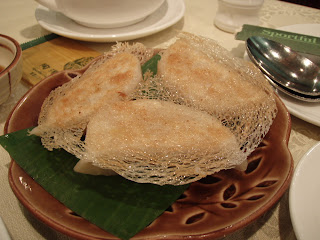 The rice flour rolls with beef was mediocre. They suffered from the too-much-pastry-too-little-filling syndrome. And the lack of sauce (why just 2 drops?) didn't help neither. 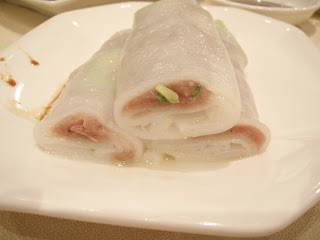 The steamed prawn dumplings, on the other hand, were tasty and dainty looking. 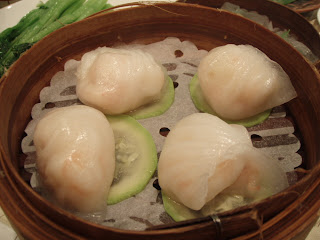 E ordered the steamed shrimp meat and inkfish (??) rolls with seaweed, thinking that they would be like maki rolls. How wrong. She said she overlooked the keyword 'steamed'. We all thought the dish looked absolutely hideous. We sampled some anyway and they really didn't have a distinct taste, and to our surprise they didn't taste nearly as dreadful as they looked. 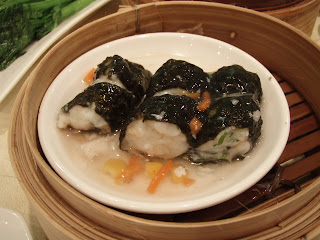 Luckily the steamed pea shoot and pork dumplings looked a lot more appetizing. They were truly enjoyable too. 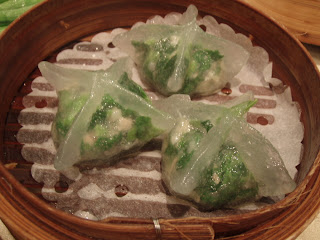 The taro spring rolls were tasty - again they were freshly made and crispy. 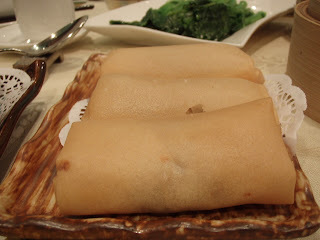 To satisfy E's sweet tooth we got the glutinous rice dumplings with sesame paste stuffing. I didn't try any but she gave her approving verdict. 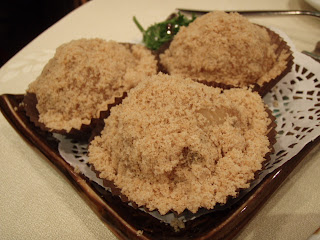 We also ordered a few other classic dim sum such as siu mai, beef balls and some steamed veg. They all came with above-average standards.
We spotted a BBQ-meat platter on the next table and decided to order one as well and that's when the saga began. The waitress came to us 30 mins after we placed the order to tell us that the meat platter on the next table was big and expensive (HK$200), and that we should consider ordering a smaller version (HK$88). We then asked her whether the cheaper version would come with the same combination of meat as the big one, and her answer was yes. We were glad that she was being helpful, until we saw the platter when it arrived. It had two unidentifiable items and 2 meats - not really what we were after. We inquired about the discrepancy but the waitress flipped right away. She said loudly that it was the 88-dollar version and we should have known. And she kept going on about the prices of the two different dishes. We tried to tell her that it wasn't the price we were worried about and hence we purposely asked her about the content of the dish. She didn't explain why she gave us the conflicting information earlier and instead she said flatly that she couldn't help us on that. Our chins dropped and before we had time to recover she snatched the plate off our table and mumbled something like she would cancel the order.
I think the bill came to around HK$300, including 10% service and 90% attitude.
Sportful Garden Restaurant
2/F, 188 Des Voeux Rd Central, Sheung Wan, Hong Kong. Tel: 2851-3381
Posted by Shanghai Bunny at 3/03/2007