One of my favourite places in Shanghai, I was so stoked that we got a large group on this particular visit, as we could finally order all the stuff I wanted to try! I have to say some of the stuff on the menu is a little adventurous (if not scary). I guess one has to make use of everything you have in a dessert. But until I am in a dessert, staving, I will leave the goat brains alone for the time being. Don't worry though because the menu here is big enough so there are lots of "normal" stuff.

We started off with some Xin Jiang Black Beer (RMB10). It tasted like larger but somehow not as gassy. Good stuff to have with the lamb . 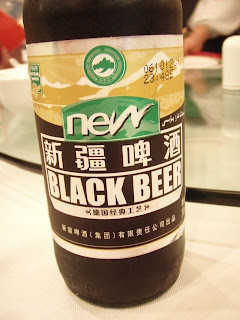 One can never visit a Xin Jiang joint without these tasty lamb skewers (RMB10 for 4). They were nicely and not quite so delicately seasoned with loads of spices. I could tell cumin and chili. Sometimes the meat can be a little fatty but on this visit it was acceptable. 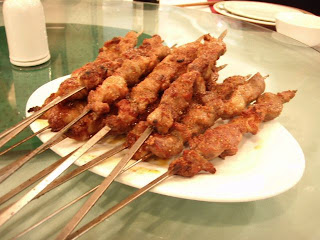 The pan fried beans (RMB12) was our "feel-good dish" amongst all the meat dishes we ordered. I personally thought the beans were a little overcooked, as they were not quite so crisp as they could be, but my friends assured me that I was being picky. The seasoning was right on the mark though. The Sichuan peppercorns added the perfect kick and a nice numbing effect to the otherwise boring dish (who likes vegetables?) I was thinking if my mom could make veg dishes like this it would have made both our lives a lot easier. 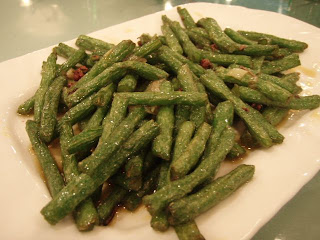 Then came the reason why we visited the place: the roast lamb leg (RMB118). I just loved the rustic way they served it. No joking around. (We saw a WHOLE roast lamb being served at the next table - now that's hardcore.) The waiter helped us cut the meat into chunks while I fantasized how satisfying it would be if I could just pick the whole joint up and eat off the bone. We were given plastic gloves to pick at the meat. How fun was that. The meat was roasted to perfection: crispy on the outside, moist and succulent the inside. The dipping sauce was also a highlight. The flavour of the sauce was actually quite complex and I couldn't quite pinpoint what was in it. 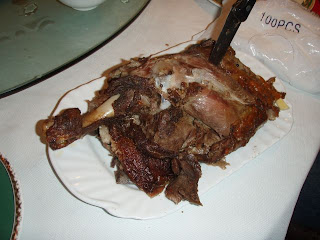 Another favourite of ours - the lamb meat in thin cake (RMB60/40). Basically it's chopped up lamb fried with carrots and green peppers. The "thin cake" was like the pancakes you get with Peking duck. Unlike Peking duck it didn't need any sauce because the filling itself was pretty moist and had lots of flavours already. 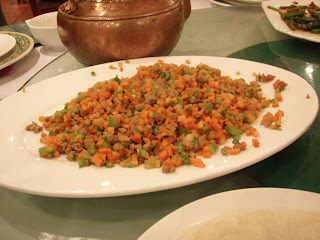 The Xin Jiang flapjack (RMB3) was another hit that night. It was simply divine. More crispy and seasoned then a pizza base, it was a perfect complement to the lamb. Twelve thumbs up! We should have ordered a second one. 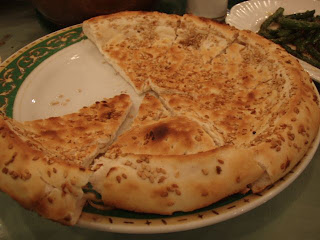 The hot and sour potato thread (RMB10) provided a good intermission for our lamb fest. The vinegar taste was awakening as our taste buds were getting a little numb from the cumin. 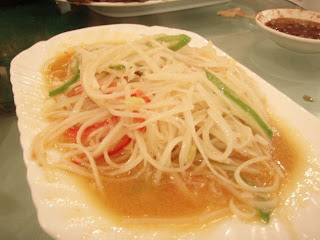 The delicious chicken (that's what it's really called) with noodles (RMB70) was accurately delicious. The sauce was almost like a Malaysian curry without the coconut milk. The meat was cooked until it was very tender that it felt off the bones easily. The potatoes were superb as they soaked up all the essence of the sauce. The noodles never came that night - the place was packed solid and the service got a little sloppy, not to mention half the waiters and waitresses were busy dancing and singing on the stage at different times. Anyhow we were so full we didn't worry about it too much. 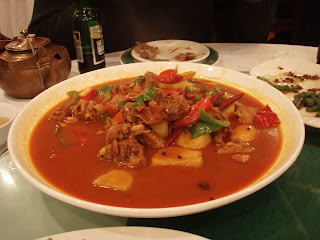 At last our stuffed baked bread (RMB10 for 4) came. They were meant to be our appetizer! They were stuffed with (you guess it) chopped lamb. They came to the table warm and soft. Some said the filling could be a little spicier but I thought it was tasty as it was. 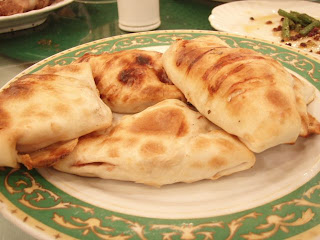 I think the no-frill way of cooking and atmosphere of the place helped make our whole dining experience exhilarating. The RMB10 beers helped too I am sure (we must have had 3 or 4 each). All in all everything was tasty although a little greasy. Then again its lamb and it's not like you eat it often. Yes so please give it a rest (you know who you are).
Uighur Restaurant (5 locations in SH)
1 Shanxi Rd South (near Julu Rd), Shanghai. Tel: 6255-0843
Posted by Shanghai Bunny at 3/20/2007