We spent a few days in Harbin last year and had the opportunity to sample the dumplings there. My husband didn't think much of them but I thought they were interesting - not that I would desperately crave them again but they are unique in its own way of you know what I mean.

Anyway my friend C is trying to find some interesting places to take her sister, who will be visiting China in April for the first time. Dong Bei Ren came to mind since I heard so much about it but never manged to convince my husband to go. What is Dongbei (northeast) or Manchurian food, other than dumplings?

We were greeted by a number cheery waiters and waitresses on the way up to the dining area. The menu had a lot more than just dumplings actually. There were lots if meat dishes - even some fish. We decided to stick with the dumplings since it was lunch time and we didn't want anything too heavy.

The waiter told us that the only non alcoholic beverage available (other than the tea) was the mixed northern coarse grain juice with corn, green beans and millet (RMB8). While my two friends U and C looked at each other in despair I jumped the opportunity to try one. I was so doing it for science. Well, for the blog.

When it came my heart skipped a beat. It was grey and thick looking - just like the mushed up cardboard+water the Mythbusters were trying to eat. To make the matter worse it was also lukewarm to the touch......I closed my eyes and took a sip. It didn't taste like cardboard paper! It wasn't bad at all! It tasted kind of like oatmeal with a hint of sweetness in it. It was actually pretty drinkable. I wondered where the color is coming from? 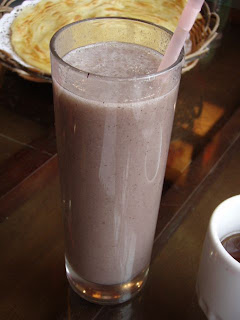 This is the home style layered bread (RMB3) we ordered. I was expecting something like an Indian paratha bread, freshly baked with a nice buttery smell. Instead imagine a piece of kitchen paper soaked in slighly mingy oil then pan fried. That's what the layered bread felt like. We sampled a little and left most of it untouched. 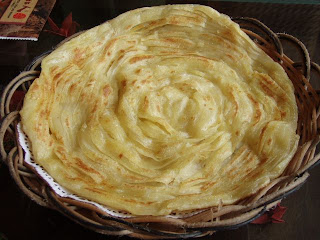 The fried shallot pancake (RMB3) was equally as greasy. I had a little bite and it was very spring onion-y. Would have been nice with less oil. 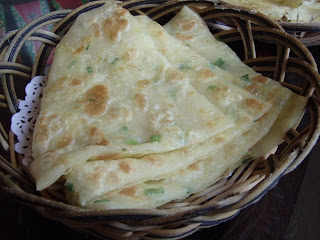 The fried pancake with beef and radish (RMB3) also seemed like it was deep fried instead of pan fried. The filling was strange - stringy beef (beef shank?), and I didn't spot any radish - not that I was digging around for it as I only ate a little piece of it. 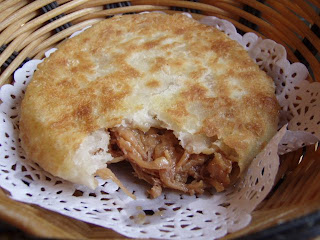 We had more success with the dumplings. There are more than 15 different types of dumpling on the menu. Since each individual order (ranging form RMB8 to RMB12) comes in 16 of them we went for the family dumpling platter (RMB20) instead. We were told that the color of the pastry comes from different vegetables. Hmm. Which pink vegetable? Anyhow the fillings in them were all different, varying from meat and veg to just meat or meat and pickled veg. All were good with the vinegar and chili sauce. 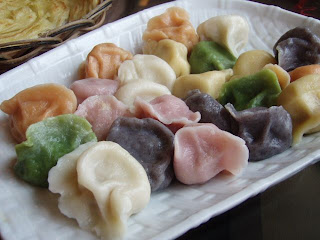