Pho is being served everywhere in Hanoi, a lot of times by mobile street vendors carrying everything (big pot of stock, all the ingredients, bowls and chopsticks) on a long bamboo stick. I did not dare. Especially not after the numerous encounters I had with roaches while walking around town.

I am glad I read about Pho 24 before the trip. A chain originated in HCM City, Pho 24 is renowned for its intricate way of beef broth preparation and more importantly its cleanliness.

It was 12 noon when I arrived and the place was packed with local white collar diners. A good sign. I started my meal with a cooling watermelon juice. Had to admire the 70s presentation. 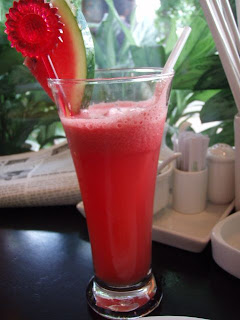 I knew I was in the right place when the waiter gave me a plate of pho fixings separately. 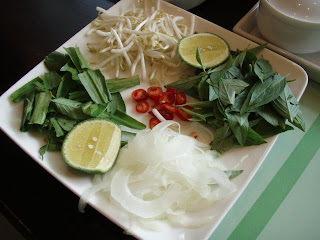 The red chili sauce was nice but I'm not entirely sure what the brown one was. It was sweet and similar to plum sauce. 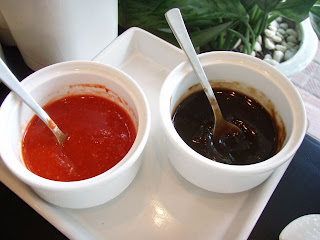 My pho bo. I added all the fixings plus chili sauce and it was delicious! The broth was rich with a complex beef flavour. I began drinking it like everybody else - it was very nice and satisfying indeed. 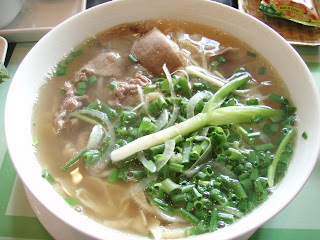 I looked around and everybody was dipping some kind of bread stick into the broth. I followed suit. The sticks were about the length of a palm. I was expecting a light yet crunchy texture but I was wrong. It was quite dense and chewy I had to pull hard to break it apart. It didn't taste of anything but it soaked up the broth nicely. Plus it helped filling me up as the portion of my pho was not the biggest. 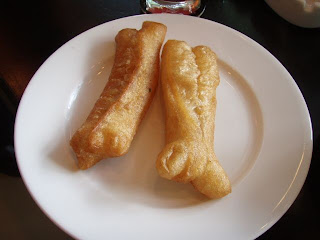 I decided to try the beef balls also. Somehow I thought they would be like meatballs, fried or something. Too young, sometimes naiive. Of course they came in soup - silly me. Unfortunately there's nothing special about them. I've had better hand-made beef balls in Hong Kong but for US$0.60 it was worth a try. 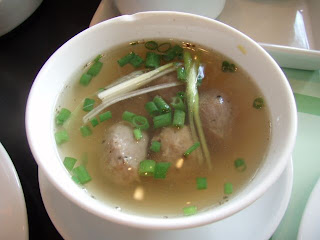 Lunch came to US$4 in total. Bargain! If I ever get to go back again I would just get 2 noodles. And get this: I was not thirsty at all afterwards - no MSG!