I read so much about Cha Ca La Vong I was determined to try it. As far as I know Cha Ca means grilled fish and the dish is a Hanoi speciality. We found the tiny restaurant in the Old Quarter district and got a table upstairs. It was an experience itself as I could feel the floor vibrate (sometimes very violently) whenever someone walked past. 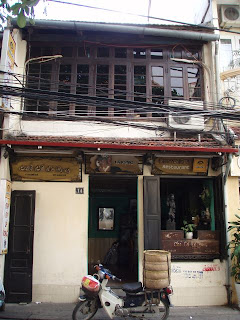 Cha Ca is the only dish available and it made ordering pretty easy. The place was like a sauna and our beer came in handy. Brewed locally by Carlsberg, Halida is quite plain with not a lot of flavours. I am not a beer drinker usually so I am relying on my husband's comment, according to him it was "alright". 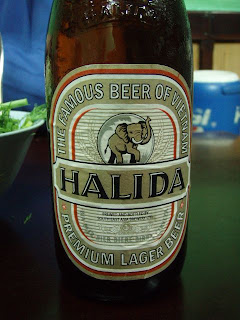 Condiments and side dishes for Cha Ca. We saw pictures of the owner with huge (taller than 6ft!) catfish downstairs and figured that the white fish should be catfish. 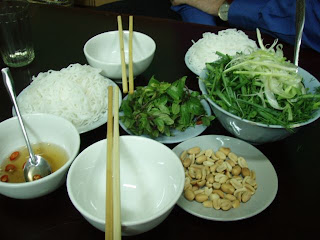 The stove had red hot charcoal and I thought my face was grilling almost! The fish and herbs (dill?) were sizzling in a rather huge amount of oil. We let it cooked for a bit and decided to throw the noodles in to soak up the flavours. 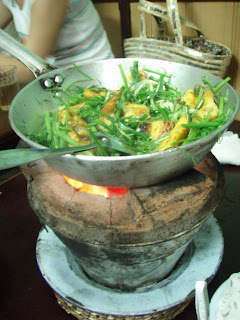 To be honest the dish was nothing special. It didn't have a lot of taste and it was quite oily. The fish itself was fresh and meaty, which I totally didn't expect from catfish. It had a salty taste from the fish sauce marinate but then that's about it. Our noodles, having soaked up the oil and juice from the pot, were still pretty bland. 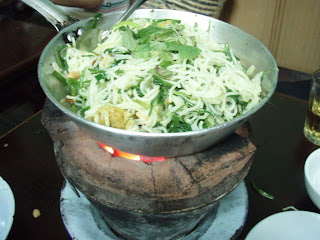 All in all it was an interesting experience and one should try it at least once, so you can tell your friends you had catfish! US$4 per person for the Cha Ca.
Cha Ca La Vong
14 Cha Ca Street, Old Quarter, Hanoi.
Posted by Shanghai Bunny at 8/09/2007