With Kaesong being the old capital, we got to sample the historic cuisine naturally. Pangsanggi, meaning a set of dishes for a table, refers to an old tradition meal originally eaten only by the royals. It always has an odd number of dishes ranging from 5 to 11. 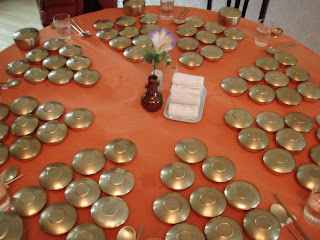 We were spoiled with choices! From bottom left to right: tofu, fried mushrooms, kimchi, flatfish, sliced potato, cucumber, sliced pork, fried egg, and finally some sweet biscuits. I thought I would need extra helpings as my eyes are always bigger than my belly. Once we got going though we realised there was more than enough food. 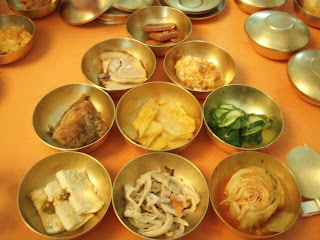 As usual there were rice and a soup on the side. To be honest none of the dishes tasted particularly delicious, they were prepared in the ways not dissimilar to the food we had been having for the last few days. But then we totally enjoyed it, as they say presentation is everything! 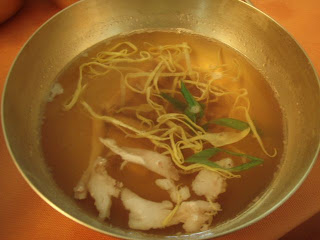 Even the small soju cup was cute! 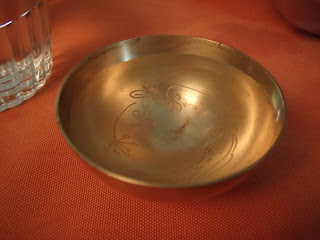 For dinner we got to sit at the traditional and uncomfortable Korean table. Anticipation for the meal was extremely high because this was the day we got to try the you-know-what meat for the first time. I even put on my tradition Korean dress for the occasion. 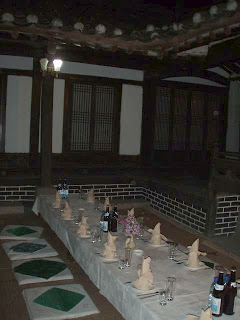 The Korean version of fish and chips. Pass the tartar sauce and vinegar please! 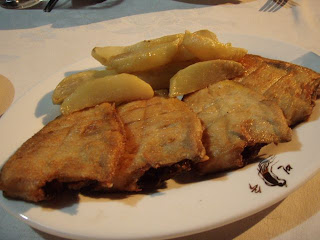 The shredded potato was really nice and refreshing. 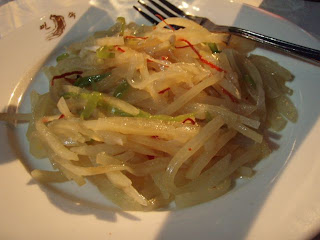 The stir-fried minced meat and hard tofu was tasty! Unlike the spicy Chinese MaPo tofu this dish had a soya base and a slightly sweet taste. And I certainly prefer the texture of hard tofu - can't stand the soft slimy stuff. 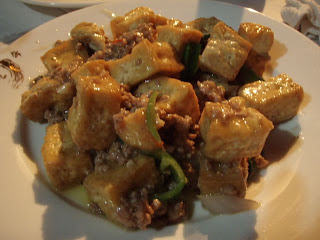 The cucumber salad was nicely seasoned with garlic and chili. 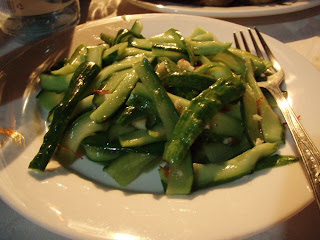 Some kind of pork stew. A bit nondescript. And you can see the fried cabbage (what else?) on the lower left corner. 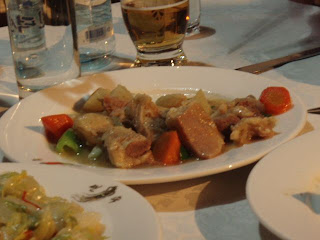 And finally................drum roll please........................the dog soup we had been waiting for the entire trip. It was optional and cost us 5 euros/person. We decided that since we were in Korea it had to be done. We were told that dogs are bred specially for eating in Korea and they are always yellow.
We didn't know what to expect but we were told that it'd be spicy and tasty and here it was. It came with a clear broth with chili sauce on the side. I tried the broth and decided that the spicier the better. 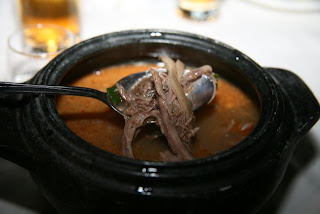 The meat tasted similar to red meat, with texture similar to beef shank or mutton. Truth be told if no one told me this was dog meat, I would never have guessed. It wasn't bad but I can't say I liked it. First we didn't like the skin and the fatty bits at all. Then of course there's the psychological struggle. I actually thought about leaving the rest after I had tried some, but it would be impolite. I ate as much as I could (pretending I was a Fear Factor contestant).