We were totally impressed at the Beijing Airport face lift. At least now there are decent shops and a semi decent restaurant in the departing lounge (unlike Pudong). It was only 10:30 in the morning but we thought we would have lunch anyway as we didn't know what we would be getting later.

The restaurant is in cafeteria style and serves 3 different groups of food: made-to-order "western food" like burgers and spaghetti, ready-made Chinese dishes, and made-to-order Asian food like Japanese ramen or Korean stuff.

Below is an example of a Korean dish and we thought we would stay away from it. 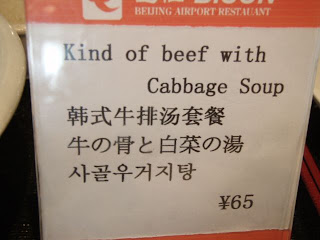 Instead we opted for the ready-made stuff - at least what you see is what you get. The Ma Po Tofu was actually really tasty! The veg were OK but we were grateful as we knew the days ahead we wouldn't be getting any vegetable other than cabbage. 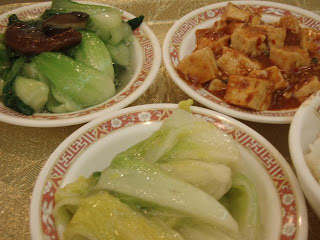 The food on Koryo Airline smelled so much better than it tasted. We were sitting at the back of the plane and we could smell curry and were getting pretty excited. When the meal arrived the "curry" dish somehow managed to have absolutely no taste at all. Talented. I had the salty sausage looking thing and a few pieces of cucumber and gave my cup-a-bun a pass. 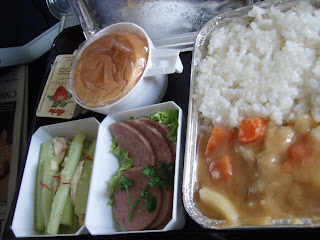 Finally we were In North Korea!!! We were introduced to what would become our best friend in the week to come: the local Ryongsong beer. It's not as gassy as regular beer and it goes well with spicy food.

Our first meal was at the hotel cafeteria in buffet style. A weird mixture of things here as you can see (clockwise from top): stir-fried chicken with potatoes; something remotely similar to salisbury steak, but breaded and pan-fried; hamburger goulash (where's the cheese?); pan-fried flat fish with chili sauce on top; rice. Everything was tasty and much better than my uni cafeteria (the trays and the white dishes brought back memories.....). I also tried the "farmer's soup" but I had not a clue what's in it. 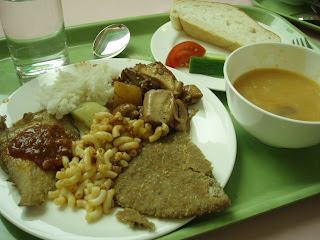 Overall we were well-fed and did not have to dip into our emergency food supply.
The day's favourite: if I really have to choose, then ma po tofu
Posted by Shanghai Bunny at 5/08/2007