Once again we were back at Whisk. It's hard to say no to the chocolate treats.

As the weather was heating up it was time to finally try the iced drinks on the menu. The one on the left is the Spanish iced chocolate and the right one the chocolate shot. They both tasted like a thin chocolate shake and there must be ice cream in them. We had no idea what made the left one "Spanish" since they tasted very similar. 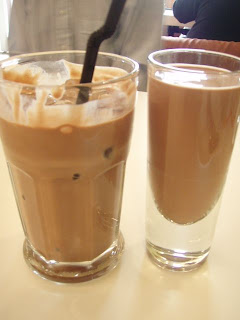 D and I both went for the pananis; his was tuna and mine mortadella. They both came warm and crisp , just as nice as the one I had last time.

My husband thought his proscuitto pizza looked odd with the white sauce (and leaves!) on the top. The base was nice and fresh as usual and the toppings worked well together. The prosciutto was very salty and we were dying of thirst the rest of the day. 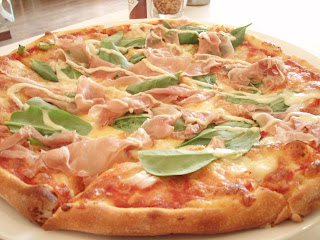 J got the tuna salad as I really liked it last time. The tuna that day was exceptionally salty unfortunately.

We were pretty full but decided to cram down a dessert. The new addition on the menu (there are always new items on the dessert menu) for the day was the chocolate cupcakes and they looked tempting surely. The topping was so sweet it was good to have the comparatively not-so-sweet cake on the bottom. 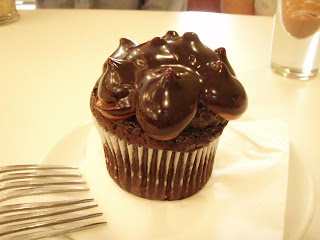