Day 4. Finally all the CNY meals were over and done with and we decided to spoil ourselves with some haute cuisine. Since we loved the Robuchon a Galera in Macau we were happy to find his new addition of his restaurant empire in HK.

The first part of the restaurant consists of a very large square "bar". According to Geoffrey Eu on The Business Times the concept apparently is "to have patrons seated, diner-style, around a lacquered countertop, facing a high-gloss show kitchen in which staff clad in black designer outfits create and serve tasting portions of culinary art". To me it was just a little odd and there was no body sitting there. We were led through a long corridor with a few private rooms before we got to the main dining area.

There were around 7 tables in the area and we got a small table. I meant small like a McDonald's table for two. The place was dark and romantic enough though with fresh lilies on the table. Not bad.

Here's the complimentary cream of champignon and it was cooked to perfection. So rich and creamy and so much better than the other salty varieties I had (mostly from Chef Campbell). :) 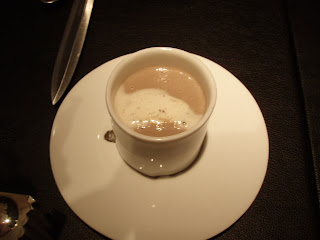 My king crab legs with avocado, basil, rocket, tomato, Parmesan, and truffle (HK$320). The king crab was as fresh and sweet as it can be, and in perfect temperature - the best I've had. There were quite a lot of crab too. 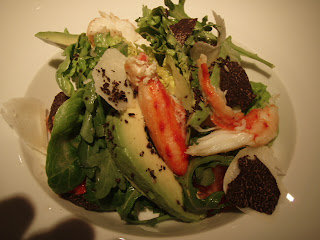 My husband had the crispy langoustine on papillote (HK$280). He said one had basil and it was definitely better than the one without. The langoustine was jet-fresh and the crispy paper provided a good contrasting texture to the dish. 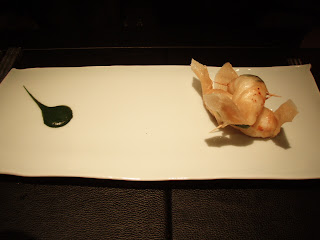 I ordered one of the signature dishes - the Le Caille - free-range quail with foie gras stuffing(HK$420). The meat was not as gamey as I had expected, which was a good thing as I find gamey overbearing. I really liked the texture and the taste of this particular quail- why doesn't chicken taste like that? The breast meat was stuffed with foie gras - I am not a big foie gras connoisseur and therefore won't comment on it. I would say the dish would be just as nice without it. 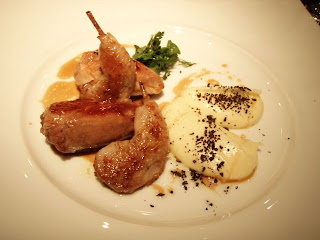 Our other main course: the crispy Amadai fish (HK$560). Some say Amadai = sea bream, some say it's tile fish. I don't even know the difference between the two. In any case it's a popular fish you find in many Japanese restaurant. In this case the fillet was pan-fried WITH the scale to get the crispiness. Very interesting and innovative but we were a little concerned about eating scales. It was kind of scratchy in the mouth when we chewed and didn't have a lot of taste. The fillet was firm and meaty but the price tag is a little steep however good it was. 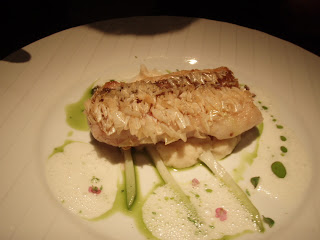 My hot green chartreuse souffle with pistachio ice cream. Made to perfection. The souffle was nice and featherlike. Didn't really taste too much of chertreuse though, but then I never had the stuff on its own to know what it *actually* tastes like. The pistachio ice cream was not overly sweet and it was just the perfect match. 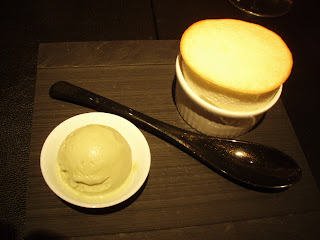 Hubby's le chocalat sensation was impression (albeit girlie) looking! Basically it was creamy Guanaja chocolate, cacao sorbet on Oreo biscuit. We love the regular dark Valrhona chocolate and we figured we would like Guanaja as well. He said the flavours were nice but confused and overly complicated. I guess it was the different texture and temperature, i.e. sorbet and warm chocolate mousse and it was all too much for him. I guess I like a man with simple taste. :-) 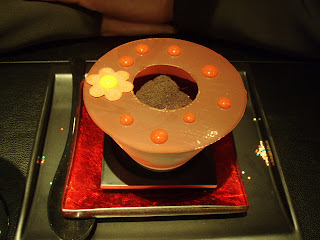 We really liked the food as everything was cooked to perfection with very delicate tastes. What we didn't like was the small tables, and the fact that the courses were served too quickly. I also didn't understand why almost everything on the menu had either truffle or foie gras in it - makes the menu look very predictably swanky in a pretentious kind of way.
P.S. The wine list is good but expensive. A glass of champagne was HK$200! Ouch!
L'Atelier de Joël Robuchon
4/F, The Landmark, Central Hong Kong. Tel: 2166-9000
Posted by Shanghai Bunny at 2/28/2007