Can't really have a blog without a dim sum entry. Crystal Jade in Shanghai serves Cantonese food whereas the one in Hong Kong does Shanghaiese stuff. It's all about doing something different eh. I don't know why but all the Crystal jade I've been to are all very popular and often with long queues.

The dim sum menu is not very big but it covers most of all the usual stuff. There are also a few northern dumpling dishes like xiao long bao and other buns but we usually stick with the southern favourites.

Here's our all-time favourite: deep fried dough sticks wrapped in rice pastry, with dipping sauce on the side. The dough sticks were fresh and crispy. The pastry could have been thinner though. 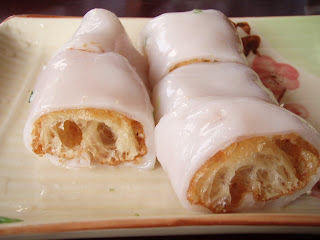 More dough sticks for us to have with the congee. These ones were even more crispy. Perfect! 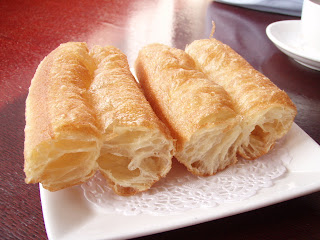 Har Gau - steamed shrimp dumplings. Didn't have the mythical 13 pleads like I saw on the Discovery Chanel, but there were at least 8 or 10 pleads on the pastry. The shrimps were big and fresh. 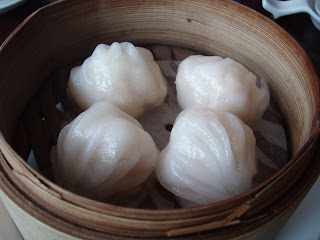 Siu Mai - steamed pork and shrimp dumplings. The pork was not too fatty at all, and there was a big piece of mushroom on one of them. Nice. 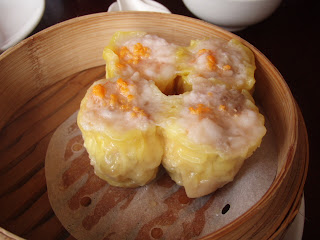 We decided to try the beef in chili oil again since it was on the 'chef's special'. This version sucked compared to the one in Xin Ji Shi. First off where was the oil? It was more like a spicy broth. Second the spiciness was not right. There was a kick but it didn't come from Suchuan peppercorns and therefore that special numbing sensation was missing. Disappointing. 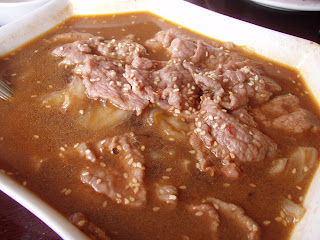 The Shanghaiese pork fillets with noodles was good though. The fillets were seasoned and fried to perfection. The batter was so thin I wondered if there was a batter after all? The cut of the meat was lean and chunky -like 200g of meat - there's no messing around! (Oh no my husband said the pork looks like turds on the pic! My bad!) 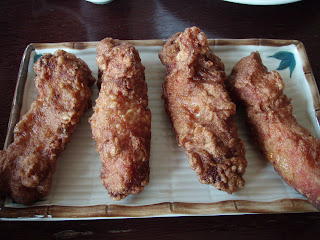 The bill came to RMB190. MSG was thrown in for free. So f*#king thirsty all afternoon!